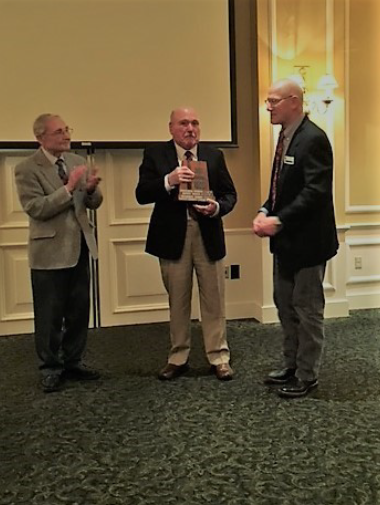 The ceremony was held on January 16, 2018 during the WFFC’s Annual Awards Meeting at the Se-attle Tennis Club. Cathy Schaefer drove the group to Seattle. Sandy Fulk also joined the trip.

The opening criteria state-ment for award reads in part:

The Award is not given unless there is a worthy candidate. Since the first award to Roderick Haig-Brown in 1975, Tom is the 29th recipient. The list includes authors, bamboo rod makers, fly tiers and journalists from Oregon to British Columbia. A who’s who of Northwest Fly Fishing History. In his introduction of Tom, Danny Beatty said:

“I am pleased to introduce Tom Fulk, an active member of the club. Tom joined the Fidalgo Fly Fishers in 1990 after moving to Anacortes from the east side of San Francisco Bay. He retired from the United States Forest Service where he was an administrator in the San Francisco office.

Tom soon got in-volved with the club as an officer and president.

About twen-ty-five years ago he bought and read Hoagy Carmichael’s book about making your own bamboo fly fishing rod. This in-troduction and al-ready established wood working skills led Tom to making some planing forms and buying some bamboo. A fly rod was soon the result. 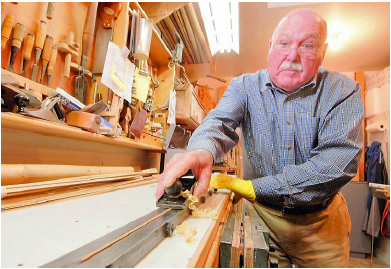 Since those early begin-nings he has made 106 bamboo rods. Twenty-two of those rods were donated to the club for raffle prizes with the funds generated going to conservation organiza-tions. Other rods were donated to fund Habitat for Humanities. He has repaired dozens of bamboo fly rods including Letcher Lambuth’s rod number 19 which is now in the Western Washington University Fly Fishing Collection. Tom has also written three books about bamboo rod making.