Gary Borger is a noted fly tier, but he isn’t a fly purist.  “There are literally hundreds of thousands of fly patterns and every one of them catches fish,” he says. Only the patterns that work have survived in the literature or the re-telling between fishers after a day on the water. The huge variety of patterns also proves a basic fact about fish behavior, he says. Fish aren’t always selective.

“During non-hatch periods fish are basically sampling the drift,” says Borger. “Anything that comes along and looks tasty they will eat it. Obviously in a hatch you want to find a fly that matches what they are taking. Even then there are some nymph designs, what I would call universal nymph designs, that are exceptional in being able to catch fish.”

The pheasant tail, for example. In just about any river tie on a pheasant tail nymph in a size 14 and smaller and “I don’t care where you are you are going to catch something,” says Borger, which means something since he has fished about everywhere. “Of course, we’ve gone to flash-backs (flash-back pheasant tail) and so on, but they don’t necessarily work any better than a plain old pheasant tail.” 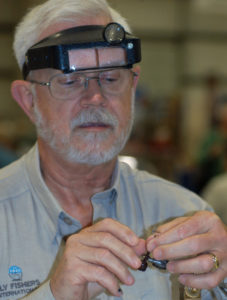 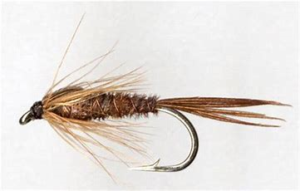 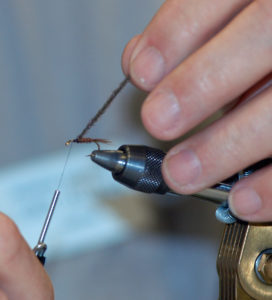 Chet Allison at work on a Pheasant Tail with the finished product at center right.

The pheasant tail is a universal nymph, says Borger. The Prince Nymph is another. Another universal pattern Borger likes is a hair-leg worm. It can be tied to imitate small may flies, stone flies or dragon fly nymphs. With a brisk retrieve it can also imitate bait fish like sculpin. 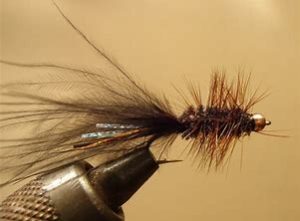 Woolly buggers are also a universal design. In fly fishing, we classify nymphs as any sub-aquatic invertebrate, including leaches which a wooly bugger imitates. Borger regularly fished the pattern like nymphs below shot with an indicator to target large brown trout and steelhead around his Wisconsin home. Add rubber legs to the pattern and the possibilities expand again.

“For some reason, fish love rubber legs. You can put them on any way you want, as a tail, as legs, have them sticking out the middle of the body, wind them on at the front—gosh dang they just work.” 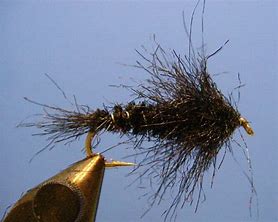