Gary Borger, author of several books on flying fishing, a pioneer in instructional fly fishing videos, a consultant to Hollywood directors, a regular speaker at na-tional events and one of the most frequently quoted casting instruc-tors of the past 20 years is also a pantomime artist.

Gary uses his index finger as often as a fly rod when he teach-es casting.

From his first videos of the 1980s, Gary began teaching by sweeping the hardware out of the picture to focus on the hand, wrist and arm movements that make a good cast. “The line is the prob-lem,” he said in a recent inter-view. Beginners and fishers with modest skill invest so much effort in getting a line airborne that they lose focus on the basic motion that makes a cast. It also was diffi-cult to teach over the chaos that students were creating with rods and lines. Gary and several other casting instructors discussed the problem during a Fly Fishers In-ternational Conclave in West Yel-lowstone in the late 70s. Teaching the hand and arm motion worked better without the rod and line. “And from then on I began teach-ing all fly casting with pantomime concepts and it works wonderfully,” he said.

“For example, everyone has seen that fabulous casting in “A River Runs Through It.” [Gary was the fishing consultant to director Robert Redford.] And I tell every-body I taught that guy how to do that when he was about 4 years old. [The stunt double for key casting scenes was Gary’s son Jason.] And the way I taught him is we just did karate chops. Because the correct arm motion for fly casting is just a karate chop. As a consequence, it becomes easy to learn how to do the motion without the rod.”

Since the movie in 1992, Gary and Jason have become ex-pert partners at casting instruc-tion. “We’ve developed lots of pan-tomimes for everything in fly cast-ing,” he explained. “To teach the reach mend, we have students drop their arm down as they cast and then reach to the side. Another thing we do is have them say the words while they are doing it, like cast, stop, reach; or cast, shoot. The timing of it is very important. If you think it, you will invariably do the thing you shouldn’t. But if you say it, you learn. Just thinking, they will let go of the line before they stop the rod or reach while they are casting. But if they say “stop,” and then “reach” they learn the motions separately, they don’t do them at the same time. It’s amazing how quickly people can learn doing that. Because they’ve devel-oped in their brain what the rod is supposed to be doing without actual-ly doing it with the rod in hand. Once they get that motion down in their thinking it becomes easier to do. That’s when we pick up the rod.” 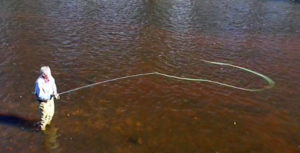 The grip is another basic of casting that gets too little attention, Gary says. 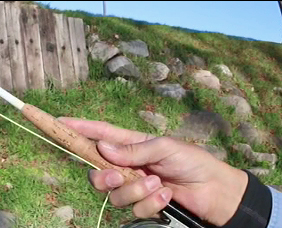 “Basically, you make the three-point with your thumb on top and your index finger on the side of the grip and pull it back so the finger is bent inward and puts pressure on the rod,” he said. 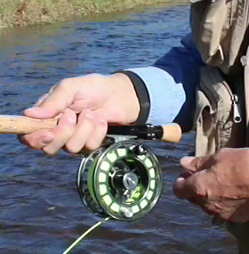 “With your thumb on top, where the thumb points the rod points. When you put your finger up on the grip, suddenly you see that where your finger points is where the rod points. Now, with the rod handle going from the heel of your hand across your palm to the point of your finger it means when you lift your arm up and flip your wrist back as far as it will go, the rod stops exactly where you want it to stop. That finger at the side of the handle allows you to use your wrist fully in the cast. You lift and flip. Then lower your elbow, move the arm forward and flip for-ward. Don’t turn your wrist, rotate it. Don’t angle the wrist to the side. You want the bones in your wrist and arm in alignment. Keep the wrist straight with the forearm and then rotate it forward.”

“What you’ve done is change the arc of the rod tip,” he said. “So with the grip and firm wrist motion you’ve changed the arc of the line and the quality of your cast.”

“Another thing that is important for a good cast,” Gary said during a recent inter-view, “is to bring your hand up outside your shoulder. If you do that, the relationship of your shoulder to your elbow will cause the rod to stop.”

“It’s also the position for the side arm cast. Just drop the arm from the elbow into a sidearm cast. If you bring the wrist up outside the shoulder and make the karate chop mo-tion beginning from that posi-tion you will get a perfect cast, you will have the elements for the perfect cast.”

“An important thing to remember is, what the rod tip does, the line does. Even though most people recognize that, until they get it into their con-scious mind and start thinking about it as they cast they don’t practice it. As a caster your job is to direct the rod tip.”