In 1987 a little know mineral exploration company called Cominco Alaska discovered a copper and gold deposit in the headwaters of Bristol Bay Alaska.

It immediately staked an initial claim and began quietly drilling in a wider circle until it accumulated mineral rights on 186 square miles of Alaska state land. Cominco broke its silence in 1997 announcing it had found a deposit holding more than 500 million tons of copper, perhaps the largest undeveloped resource of its kind in the world. From there the claims wound through various ownerships generating an expanding library of resource estimates and mine feasibility studies until the mineral rights were accumulated by Pebble Mines Corp., a newly form partnership of powerful mining interests in Canada and England. The fact that Bristol Bay is home to one of the largest salmon nurseries in the world wasn’t a factor in their planning. When the Pebble Partners bought those claims there was no value attributed to the fishery.

The Pebble partners moved slowly on engineering studies, cultivating political connections, wooing elected officials with promises of jobs and prosperity. Then without fanfare in 2017 Pebble asked the Army Corps of Engineers for permits to begin work. The Army Corps responded with a plan for rapid review and approval aimed at a decision by December 2020, the end of the term for a newly elected, pro-development President of the United States.

“That was our ‘Oh Dang’ moment,” said Meghan Barker of Trout Unlimited Alaska. “It was so obviously political. Once we saw that Army Corps timeline, we knew right away it was time for TU to dial up the organizing. If a permit were granted there would be a hole in the ground in 3 to 5 years,” she said during a February phone interview from Anchorage.

At nearly the same time when the Pebble partners stepped onto the scene in the early 2000s, concern began growing among the 8,000 native residents of Bristol Bay. Along with them were hundreds of commercial fishermen whose catch employed another 14,000 in processing and transport, plus nearly 1,000 sport fishing guides and lodge owners. Together they were a committed and large coalition of people who relied on the abundant fishery of Bristol Bay and they were organized and ready for the fight.

In addition, there was a community of fishermen and women in the Lower 48 that had come to appreciate Bristol Bay on frequent trips to its lodges and rivers. Lake Iliamna, about 15 miles from the center of the proposed mine, was a destination for many. River names like the Newhalen, Koktuli and Nushagak were familiar to thousands who had cast lines there for early season trout, then all manner of salmon in summer and fall. Fly fishermen especially knew the value of that habitat because similar salmon nurseries were destroyed elsewhere on the Pacific Coast of the US.

Trout Unlimited put the two together.

A team of 5 TU staffers in Anchorage backed by two others in TU’s Washington D.C. office began a strategic and aggressive information campaign. TU members were the first focus of the campaign. Then inboxes of fishermen who had visited Bristol Bay lodges began to fill with regular messages about the impact of a mine. The issue began to appear on the agenda of fishing clubs everywhere. It wasn’t only TU Chapters. The Anchorage team targeted any group that appreciated the value of an abundant fishery. Most messages had email links to reach out to lawmakers and public officials. Monthly messages soon became weekly, then almost daily as December 2020 approached. The campaign was starting to work. Lawmakers were beginning to speak in opposition. Still the Army Corps plodded on so the TU team in Anchorage went for broke. They launched a campaign urging sport fishers nationwide to write President Donald Trump in opposition to the Pebble Mine.

“We got laughed at,” Barker said recalling the response of other conservation groups. The TU team wasn’t deterred, she said. “There’s science and then there’s public opinion and we used both every way we could think of.”

The campaign to influence the president began in summer 2020. Then in early August Donald Trump Jr., a hunter and the President’s eldest son, announced his opposition to the mine. It was a welcome surprise, but hard to know if it meant something more, said Barker. Then on Aug. 24, the Army Corps formally denied the Pebble mining permit. Whose to know if the presidential email campaign made a difference. What is clear is that at least one Trump was paying attention. 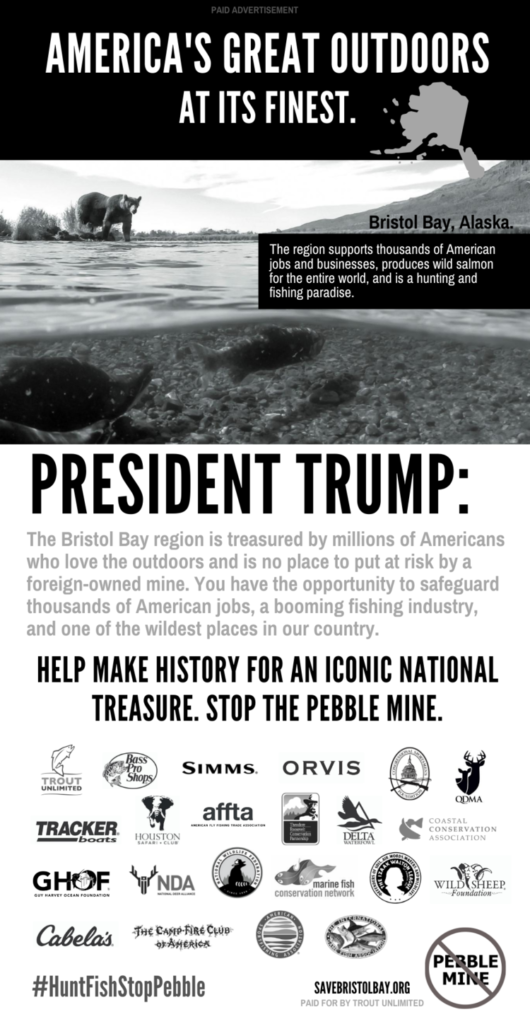 “That is the beauty of this issue,” said Barker. “It was natural to bring together this community to fight this, especially the fly fishing community that comes here,” she said. “What I loved about this campaign is that we were able to build good relationships with people who wanted to take action, who wanted to develop a culture of advocacy. They were ready, plugged in and prepared to take action.”

It’s also important that Mehgan Barker and four TU colleagues in Anchorage helped build those good relationships. They are the ones who plugged fly fishers in the Lower 48 into the Bristol Bay coalition in Alaska to amplify all our voices. The next challenge for Barker and the Anchorage TU team is to persuade congress to permanently remove Bristol Bay from risk of mine development. Work has already begun to do just that and once again the TU team is in the lead.

The outcome of the Pebble Mine campaign is even more noteworthy now that Fly Fishers International has partnered with TU nationwide to work together on conservation issues. With partners like Meghan Barker and her co-workers at TU, the future looks bright. Teamwork got results for everyone who cares about Bristol Bay Alaska and the TU crew in Anchorage was the “work” at the center of that team. Thank you.