Washington FFI members have the opportunity to vote for three nominees for an equal number of openings on the FFI board of directors. Jim Goedhart of the Washington FFC, Claude Kistler of the Spokane FFC, and Judy Larson of the Overlake FFC are excellent choices to fill vacancies on the board. The profiles of each candidate are below. In the coming weeks you will receive a Survey Monkey ballot from the national office of Fly Fishers International. Please take time to cast your ballot as soon as you receive it. Thank you for your support of the Washington Council of FFI. 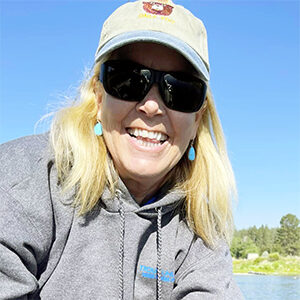 Judy Larson (Harris) is an avid catch and release fly angler who spends inordinate amounts of time chasing trout and daydreaming about chasing trout. She is involved with the Overlake Fly Fishing Club and serves as their Vice President for Education. Judy is active in FFI Women Connect. She was a presenter at the 2021 FFI Virtual Conference where she presented strategies for chapters interested in diversifying and growing their membership. She also serves on the Executive Board of the Three Rivers Chapter of Trout Unlimited.
Judy has a passion for making sure outdoor spaces are accessible, welcoming, and safe for all. She is currently producing, directing, and writing a documentary titled, “All in the Water” about diversity and inclusivity in the outdoors which will be submitted to film festivals in 2022. 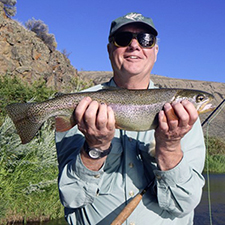 Jim Goedhart was raised in Southern California and introduced to fly fishing at the Long Beach Fly Casting club in 1964, taking casting and fly-tying lessons there during his senior year in high school. He attended Chico State College in Northern California and fly fished in rivers around the Mount Lassen. Over the years has fly fished in Europe, South America, Mexico the Caribbean and across the US in both fresh and saltwater.
Professionally, after graduate school, Jim worked in manufacturing management information systems at United Technologies, GTE, the General Electric Company and for PRTM/KPMG Consulting firm. In 1990, he founded Locus Consulting while living in Chicago. My wife and I moved to Washington in 1997 as a result of a “Lean Manufacturing” multiyear project at Boeing.
Jim join the Washington Fly Fishing Club (WFFC) in 2012 and has served in the roles Webmaster, Fundraising, Treasurer (2015-2018) and as President (2019-2021). I am currently the President of the WFFC Foundation with the mission to contribute to charitable, scientific and educational purposes to promote the conservation of Washington’s fish and habitat resources.
Jim says he would be honored to serve on the Board of Directors of the Washington State Council of the Fly Fishers International in support of its mission to enhance and preserve fly fishing opportunities through environmental stewardship and education.

Claude Kistler has been fly fishing off and on since his early 20’s. He was mentored by friend and longtime FFI member Lory Watkins. He became a Life Time member of FFI as a tribute to Lory upon his passing in April 2013.
While the majority of his fly fishing experiences have been at Eastern Washington Low Land Lakes, he has been fortunate enough to fish in rivers and streams in North Idaho, Western Montana and his favorite, small creeks in the Big Horn Mountains of Wyoming.
Upon retirement from a career in Public Broadcasting in 2013, Claude became active in the Spokane Fly Fishers. He served in several officer positions and as President from 2015 – 2017. He currently serves as the Education chair after serving as Conservation chair for several years. For the past five years he has chaired the SFF Annual Fly Fishing School and enjoyed working with new fly fishers as well as various youth groups as they learn about fly fishing.

Please navigate to Appearance → Widgets in your WordPress dashboard and add some widgets into the Sidebar 2 widget area.