A couple of years ago, I was at a fly shop Christmas Party, where I talked to an employee of Rajeff Sports.  He mentioned that Tim Rajeff was promoting a campaign to stop removing catch and release fish from the water. The organization was called “Fish Need Water.”  Their website can be found at http://www.fishneedh2o.org/today/.  A little later I found similar organization titled “Keepemwet.” Their website is https://www.keepemwet.org/.

When I first found these two organizations most of the videos on the web from guides and fly shops were showing large trout and steelhead freshly caught being held by a fisherman out of the water.  Typically, the fish’s head was pulsating side to side while his mouth was opening and closing.  They seem to keep fish in this pose for a long time; I guess to imprint on the viewer’s mind the great fish the viewer could catch fishing while with them.  My wife would hear me screaming obscenities at the computer monitor followed by “Put that fish back into the water.”

Fish Need Water also references scientific papers on fish survival. They stated that between 2012 and 2014, 235,000 Chinook were hooked and released in Oregon & Washington waters.  Of those fish, 102,000 died afterwards from various causes with a significant percent related to the angling event.

A couple of interesting points have come up from these two organizations.  One compares pulling a fish out of water after a stressful fight would be like running a marathon and then having your head held under water for similar length of time. The other point being made is that just because a fish swims away doesn’t mean the fish is all right and will survive your mishandling of it.  It may perish later from the encounter.

The FFI conservation committee proposed to the board that it approve Keepemwet as a conservation partner which I believe they did. Keepthemwet works to improve catch and release handling which fits with existing FFI policies.

I think things are getting better.  I no longer see those long out of the water frontal fish shots.  I am now hearing stuff like “no fish was removed from the water during this trip.” I am seeing more pictures of trophy fish taken in the water. I hear fishermen talking about their improved handling of the fish they caught.  I myself have changed many of my fish handling practices.  So, I urge you to check out these two websites and reflect on what they have to offer. Remember the fish you handled with care may be the fish you catch tomorrow. 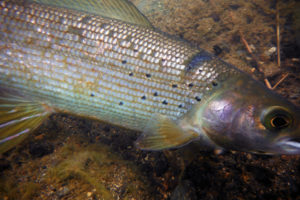