It’s a rare opportunity when you get a chance to preserve fishing access on one of the West’s great steelhead rivers. Right now we’ve got that opportunity.

The Wild Steelhead Coalition of Seattle in cooperation with The Inland Empire Fly Fishing Club in Spokane has struck a deal to acquire 8 acres on the bank of the Grande Ronde River in eastern Washington. The land, a great deal at $25,000, stretches along nearly 2,000 feet of riverbank along some of the best summer steelhead water in the state. The Wild Steelhead Coalition put up $2,000 in earnest money to secure the land. The Inland Empire club has pledged $2,000 to the purchase. The Washington State Council of Fly Fishers International has pledged $2,500 and an anonymous donor has pledged another $2,000. The goal is to raise an additional $16,500 this fall and close the deal before the end of the year, said Jim Athearn of the Inland Empire club.

“It’s my intention to talk to anybody and everybody in the FFI clubs in the state to make this happen,” said Athearn. “These 8 acres are never going to grow a cow or a bushel of wheat, this needs to remain fishing access.” 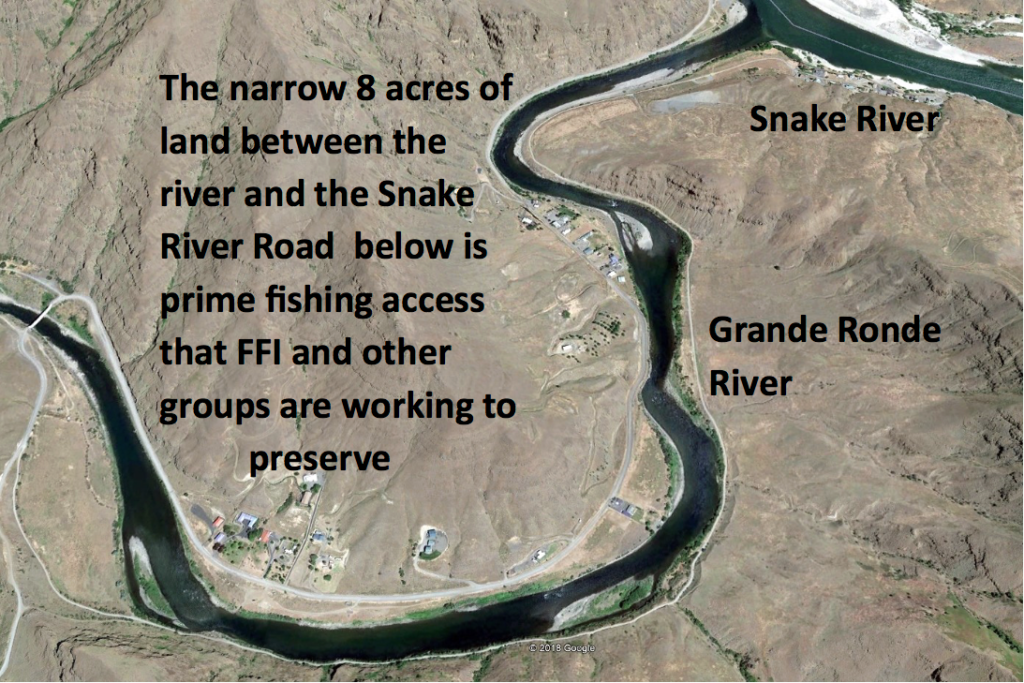 The area between the north bank of the Grande Ronde and Snake River Road has been public fishing access since the early 1980s when the Washington Department of Fish & Wildlife acquired a recreation access easement from property owner Lynn Miller of Lewiston, Idaho. But Miller now needs to sell the land, said Chris Donley, WDFW Region 1 fish program manager. The family offered to sell the land to the state, but WDFW doesn’t have money for acquisitions so Donley turned to the Inland Empire Fly Fishers in Spokane.

Inland Empire officers were interested, but cautious, said Athearn. Price was the key. After a few conversations, Athearn and Miller settled on $25,000, which was affordable. The Wild Steelhead Coalition agreed to act as the non-profit transfer agent so private donors could receive tax benefits for their gifts. Once acquired, the coalition will transfer the land to WDFW for ongoing management. The Inland Empire club will not own the property, but it is organizing and leading the purchase campaign.

The Miller family “would rather see people get recreation value from the land than see someone buy it and put a McMansion on it,” said Donley of WDFW.

It’s already a mansion in the minds of many steelhead fly fishers. The property, about three miles up stream from the confluence with the Snake River, is a stony shoreline between what are known as the Turkey Run on the downstream end and the Shadow Hole on the upstream end. There is a pull off onto the property and a pit toilet installed by WDFW. The spot is known as the Ebsen Fishing Access in WDFW documents. At its widest, there is only 250 feet between the river and the road.

“There are easements in the area, but what we are short on is camping area,” said Donley of WDFW. “Now this gives them plenty of room to camp along the river as well.”

Officers of the Washington Council of FFI urge members to join the campaign and donate to acquire this valuable access point on the Grande Ronde. For more information, contact VPCommunications@wscffi.org. To donate, send checks with a note on the bottom that the funds are for the Grande

Ronde Land Acquisition and mail to:

Part II of the Story “a done DEAL”