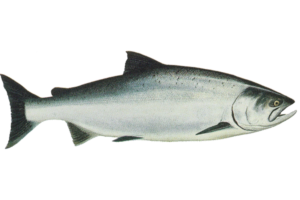 During a recent TU meeting I was having a conversation with a recently retired local WDFW fish biologist.  He said to me “You know Jack, we have created quite a large business fighting for Salmon.” Later I reflected on what he said and thought of all the fish conservation organizations in the NW and the number of people connected with them.  So, I started looking into the different salmon and steelhead conservation players and thought that I would pass on some of what I learned.

Wild Salmon Center – This organization scientifically identifies and protects the strongest rivers suitable for wild salmon. These areas of focus included Northern California, Oregon, Washington (there are two river systems), British Columbia, Alaska, Russia and Japan.  They work with communities, agencies, tribes, and local conservation groups providing them with scientific, political, legal, fund raising and communication expertise.  The Wild Salmon Center’s home office is Portland and they have a staff of 20 paid employees of which 4 are Phd’s, 8 have their MS and 6 are BS/BA degreed. The average annual revenue over the last five years is $5.8 million dollars a year. See www.wildsalmoncenter.org/

Wild Fish Conservancy – This organization use to be called Washington Trout. Their emphasis is on science, education and advocacy.  They have a staff of 16 professionals of which a sizable number of them have degrees in fish related science.  Dr. Richard Williams is on their board as well as on the FFI board. Their current high–profile project is the Columbia River Pound Net Project which is also referred to as a fish trap.  This project is being supported by NOAA, Wildlife Departments of the three NW states, University of Washington, Wild Salmon Center and a host of other conservation groups and private business. They have initiated or been a part of various law suits and have been listed as an “extremist organization” by the Costal Conservation Association (CCA).  They are located in Duvall, and more can be discovered about them at  www.wildfishconservancy.org/

The Conservation Angler – The Conservation Angler advocates for wild fisheries, which includes steelhead, salmon, trout and char, throughout the Pacific Range.  They see themselves as a watch dog organization that holds public agencies and nations accountable for protecting wild fish, by use of administrative, political and legal means.  CCA also accuses them as being an extremist organization.   One of their major initiatives is hatchery reform. They have a staff of 5 employees which include Bill McMillan and Bill Bakke.  Their home is located in Edmonds and go to www.theconservationangler.com/ for addition information on them.

Native Fish Society – Their mission Statement states “Guided by the best available science, Native Fish Society advocates for the recovery of wild, native fish and promotes the stewardship of the habitats that sustain us all.” One of their major achievements is the publishing of the River Steward Handbook which you can download from their website. They have a staff of 7 and their revenue in 2017 was $509,676.00.  Their headquarters is in Oregon City and you can find out more about them at https://nativefishsociety.org/

The above list contains the major Northwest Wild Fish advocacy organizations.  In addition to that we have other groups that specialize in recreation fisheries.  The big gun in this department is the CCA which has 18 chapters in Washington and 12 in Oregon.  Their Washington home is Vancouver and their Oregon home is in Portland.  The Oregon chapter has a staff of 4 of which one is a lobbyist.  Washington CCA website doesn’t go into their staff, but I know they have had in the past a director, an office manager and a paid lobbyist.

In addition, there are many smaller local organizations that deal with Salmon & Steelhead such as the NW Steelheaders, Skeena Wild Conservancy Trust, Friends of the East Fork, Wild Fish Rescue, Snake River Waterkeeper, Trout Unlimited, Idaho Rivers United and Save Our Wild Salmon to name just a few.  And the list goes on and on.