Fly Fishers International (FFI), announced today that Patrick H. Berry has been named as the organization’s new president and chief executive officer. Berry brings over 27 years of experience within the environmental conservation field, having come to FFI from the Vermont Community Foundation where he served as vice president of philanthropy. A former commissioner of the Vermont Fish & Wildlife Department, Berry is recognized as a visionary conservationist and is widely respected by his peers.

“We are very proud and excited to have found an individual of Patrick’s credentials to serve FFI in this important leadership position. His management and fundraising experience — and especially his conservation philosophy — will serve FFI well as we continue to strengthen the voice of fly fishers around the world,” states Tom H. Logan, chairman of the board of FFI.

Berry has served in numerous fundraising and leadership roles during his 27-year career, including having managed 130 full time employees and a budget of $20 million as commissioner for Vermont’s Fish and Wildlife Department. He increased department revenue by almost $6 million in private contributions, general fund support, and capital appropriations. He previously was with the Vermont Law School, where he was instrumental in planning and implementing a $15 million capital campaign, building successful philanthropic partnerships with state and national foundations, high net-worth individuals, and corporations. Berry was recruited to the Vermont Law School from Middlebury College where  he served as liaison from College Advancement for Environmental Affairs and sustainability efforts. Prior to that, Berry managed policy initiatives and acted as chief legislative strategist and lobbyist in the Vermont State House for the Vermont Natural Resources Council.

”Thanks to the passion and engagement of the board of directors and the dedication and hard work of the FFI staff, I am fortunate to be taking the reins of an organization ready for a transformational chapter in its history,” said Berry. “It is an honor to be chosen to lead such an important organization in the world of fly fishing and conservation.” 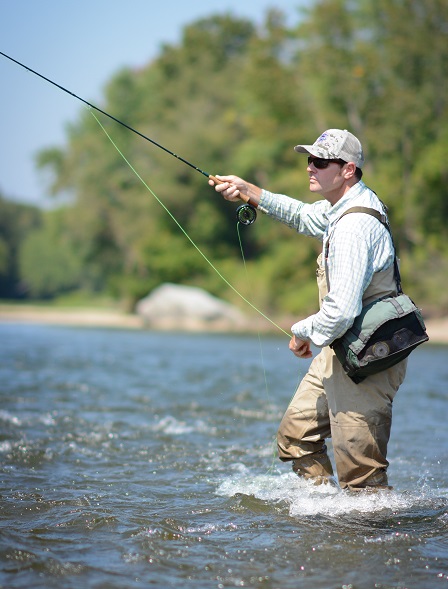 University of Montana. He is a lifelong outdoors enthusiast who enjoys hunting and fishing and is an  expert fly fisherman who began his career as a professional fly fishing guide and commercial fly tier. He lives in Vermont with his wife and two teenage sons. Their family also includes two English springer spaniels, Keller and Griffin, that Berry trains for hunting and field trials, and one English cocker spaniel, Fergus, who specializes as a bird hunting dog. Berry plays guitar and banjo in a local band. He is accomplished painter, and the brook trout he painted is featured on one of Vermont’s conservation plates.

Fly Fishers International has been an organized voice for fly fishers around the world since 1964. They represent all aspect of fly fishing from the art of fly tying and casting, to protection of the natural systems that support healthy fisheries and their habitats so essential to the sport. Their mission is to preserve and enhance fly fishing opportunities around the world.  They strive to ensure the legacy of fly fishing for all fish in all waters continues by focusing on conservation, education, and a sense of community. These three pillars collectively guide FFI’s vision for the future of fly fishing — a future in which opportunities to fly fish prime waters continues; fish thrive in healthy, protected habitats; in which learning never stops; and the true value of camaraderie prevails.