Many people, when tying Steelhead/Salmon flies, have a problem with folding hackles. There are many methods to achieve this. The most popular is using your scissors to break the hackle barbs at the base of the stem. Once this is accomplished, you are able to stroke the fibers rearward as you wrap the hackle on the fly.

Tie in a hackle by the tip with the shiny facing you.

With the tips of your scissors, start at the tip of the hackle where it is tied onto the hook. Apply a slight amount of pressure and run your scissor over the hackle toward the base. You should feel the hackles fibers break. Repeat this process several times. The hackle fibers should be facing rearward.

As you wrap the hackle, stroke the hackle fibers toward the rear collapsing the top fibers onto the bottom fibers. Do this on each successive wrap. Ensure each wrap is in front of the previous wrap. Tie the off the hackle normally.

Folding hackles for some tiers is real easy. It still is difficult to get the feel of using scissors or another blunt straight edge to break the hackle fibers. There is a very simple tool to help with folding hackles. Using any piece of flat flexible plastic, cut a “V” into one of the edges. In this demonstration, I am using a divider from a plastic box. 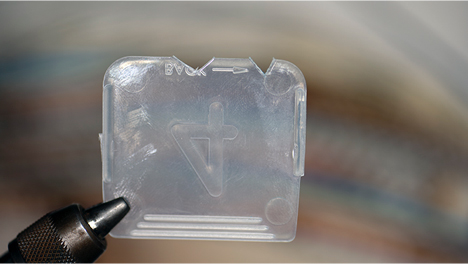 I have two”Vs” in this example, the large “V” is using for very large hackles used in saltwater flies. The smaller “V” when done correctly breaks the hackle fibers on both sides of the stem and folding becomes extremely easy. 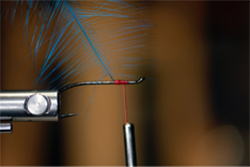 Tie in a hackle by the tip with the shiny facing you. 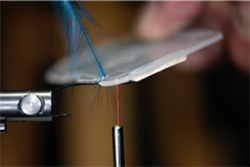 Position the “tool” such that the stem is at the apex of the “V”. Then just stroke the tool towards the base of the hackle. Repeat this process several times and all the fibers will be facing rearward. This will only work if you are going from the hackle tip to hackle base!

As you wrap the hackle, stroke the hackle fibers rearward collapsing the top fibers onto the bottom fibers. Do this on each successive wrap. Ensure each wrap is in front of the previous wrap. Tie the off the hackle normally.

One final note, this method provides a much more consistent hackle collar and it is designed so anyone with a little practice can master folding hackles. Now, do the fish care? I do not think so. All Steelhead/Salmon are magnificent fish, they desire your best flies!!!!