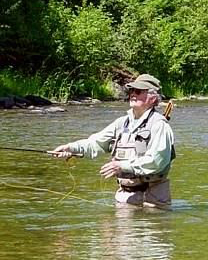 Les Johnson, one of the founding members of the Wild Steelhead Coalition, writer, and longtime advocate for the protection of salmon, steelhead, and coastal cutthroat trout passed away peacefully in May 2017. Les’s tireless advocacy for the welfare of coastal cutthroat was instrumental in the adoption of strict catch and release regulations in marine waters of his home state of Washington.

In addition to his conservation work, Les authored two of the definitive books on fly fishing for sea run cutthroat. Sea Run: Complete Guide to Fishing for Sea-Run Cutthroat Trout and Fly-Fishing Coastal Cutthroat Trout can be found in the library of every angler who pursues these wonderful fish.